Why Does Steel Rust? Plus Other Steel Rusting Questions Answered 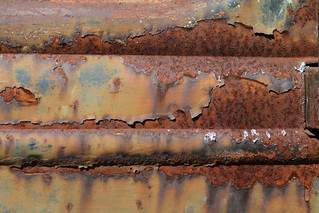 Despite being one of the most common and useful materials manufactured materials in the world, steel has always had one major flaw. It rusts. We often see the dark brown or red color and flaky material on old bridges, old buildings, and on steel that has just been left out in the open for too long.  Steel isn’t the only metal however that rusts. Just take a look at any pennies you have laying around, any silverware you have, or pictures of the Statue of Liberty. Zinc, nickel, copper and aluminum and many more metals are also subject to the corrosion chemical reaction. Why steel rusts in the first place, why some steel rusts and not others, and why steel doesn’t rust in certain situations makes for an interesting topic.

Why Does Steel Rust?

Any material made with iron that is exposed to both oxygen and water will rust. Because steel is made almost entirely of iron, it is the most highly manufactured man made material that is subject to rust. To understand why steel rusts, you have to know a little bit about chemistry and the periodic table. After the element Helium, elements like having 8 electrons in their outer shell, and will borrow electrons from other elements to achieve that level. Water, for example is made of an oxygen atom with 6 outer electrons and 2 hydrogen atoms that have 1 electron each. Through the borrowing and sharing of electrons in a reduction reaction, FeO(OH) (the most common form of rust) is created.

How Does Rust Form?

When any type of steel rusts, including steel, it undergoes a chemical reaction called corrosion. During that process of being exposed to air and water while being left outside or in the elements for an extended period of time, a variety of different types of rusts can form, but the most common form is Fe2O3. Rust only forms on the outside of a metal surface because it requires exposure of oxygen and water to rust. If you find an old metal table or steel rod that’s been left outside that you try to scrub clean of rust, anything shiny under the surface you see has not been exposed yet to both oxygen and water.

Does Steel Rust in Water?

Yes, steel does rust in water, just look at underwater photos of sunken ships. However, it forms a different type of rust that does not develop as quickly as common rust you see on metals left outdoors – FeO(OH). Specifically, it creates iron(III) hydroxide Fe(OH)3. Steel needs both water and the oxygen from air to create FeO(OH) rust. That doesn’t mean that your boat made out of steel materials is protected from corrosion however, as only a small amount of air can cause steel to rust. You can see for yourself how creating common rust requires both the presence of air and water by trying out this at science experiment at home:

Does Steel Rust in Saltwater?

Yes. In fact, steel rusts faster in saltwater than it does in freshwater. The presence of salt acts as a catalyst, accelerating the corrosion chemical reaction process. Salt is an electrolyte, and it contributes ions into water. Those that live in colder climates are well aware of the corrosive danger of salt and have to check their cars regularly during the winter for signs of rust if salt is regularly spread on their roads to combat ice. Roads, bridges, and other steel structures along roads in colder climates are also at risk of deterioration.

How Fast Does Steel Rust?

Steel will rust immediately when being exposed to moisture and air. How quickly steel rusts typically depends on how much steel is exposed to moisture and air, the levels of both moisture and air, and whether or not any protective coatings are present (we’ll get to that later). While the chemical reaction that causes steel to corode happens instantly, it may take some time for you to notice. Visual signs of rust may appear as quickly as a week or two when exposed to the right conditions. Rusting will affect the exterior of steel first before slowly corroding through the steel surface. Given enough time, all iron in the steel material will oxidize and render the steel essentially useless for the purpose it was intended for. Luckily, that oxidation process typically takes a long time, and some rusted surfaces can be fixed with a little bit of work as Jay Leno helps to explain.

Yes. Mild steel, also known as carbon steel, will rust over time unless it is treated with some sort of protective coating to prevent the steel from coroding. Mild steel has a low carbon content, and the carbon does not help prevent the steel from rusting. Elements that are introduced to steel like molybdenum, titanium and chromium can improve the corrosion resistance of steel, but it does not make the steel rust proof.

Does Galvanized Steel Rust? What About Titanium Steel and Stainless Steel?

While the iron in steel is subject to the oxidation process that forms rust, providing the steel with a thin layer of material that doesn’t rust is an effective way to protect the steel from corrosion. Here are a few of the most common methods for protecting metals from corrosion.

Coating steel with zinc is commonly referred to as galvanizing steel. Steel, among other metals like aluminum and iron, are immersed in 860 degree Fahrenheit zinc. The zinc reacts with oxygen and carbon dioxide to form zinc carbonate, which is seen as the exterior of many metallic objects like street lamps, I-beams, and other steel products. Not only does it give the steel a nice visual appearance, it does an excellent job with preventing rust from forming. Of course, if the exterior surface gets scratched or worn away, then the now exposed steel will begin to corrode.

Coating steel with a thin layer of chromium oxide is more commonly referred to as stainless steel, and is one of the most widely manufactured corrosion resistant steels in the world. The chromium acts mostly to prevent the oxidation process of corrosion from occurring, as it acts as a barrier of oxygen from reaching the iron of the steel. Chromium also gives the steel a clean and polished appearance that makes it practical for a wide range of applications.

Steel that is coated in with aluminum-silicon alloy has more resistance to corrosion than steel, and also keeps the steel’s properties at extremely high temperatures. For that reason aluminum steel is often used for applications that require the material to hold up to high temperatures while not rusting over time like HVAC units, car mufflers, ovens, water heaters, and fireplaces.

How Do I Keep Steel from Rusting

Whether you have steel tools, car parts, or a shed made of steel, they can all succumb to rusting if you don’t treat them properly. Here are a few of our favorite tips for preventing rust from forming on everyday items made from steel.