Top Down Greening: Green Roofs on the Rise

Several recent trends indicate that our urban and suburban skylines might be evolving in the years to come. According to an analysis of internet search data over the last year, the popularity of green roofs is on the rise.

Green roofs? Plants, even trees, on a roof? To the uninitiated, vegetation on a building’s roof or exterior walls is usually an indication of neglect and decay, but in the case of green roofs that is emphatically not the case. The web site of the Department of Horticulture at Michigan State University describes green roofs as “growing plants on rooftops, thus replacing the vegetated footprint that was destroyed when the building was constructed” (Michigan State University [MSU], n.d.). Green roofs are classified as intensive or extensive, based on what types of vegetation are involved and the intended purpose of the space. ‘Intensive’ green roofs use a wide variety of plants including trees and shrubs, and are often open to the public as urban parks or gardens. ‘Extensive’ green roofs utilize low maintenance plants and are usually not meant to be used by the public. Whether intensive or extensive, the major ecological benefit of green roofs is storm water run-off management (MSU).

As the cynical among us would expect, the benefits of green roofs are not solely ecological, but economical as well. More effectively managing storm water run-off benefits the environment, certainly, but also helps prevent flooding, erosion and sewer system overloads that are both expensive and hazardous. Green roofs also last longer than traditional roofs, as they are protected from the “ultraviolet radiation and the extreme fluctuations in temperature that cause roof membranes to deteriorate” (MSU). 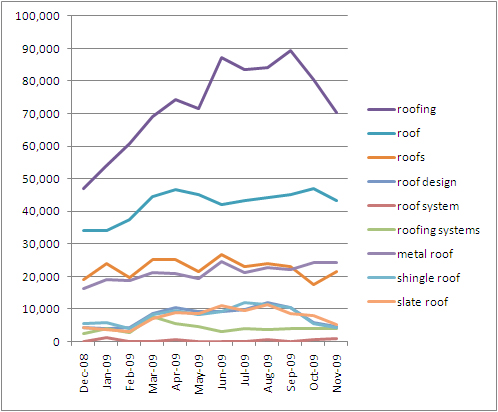 This data is even more striking when the recent economic recession is taken into consideration. In an article for builderonline.com, Brooke Rainwater of the American Institute of Architects is quoted, noting that “the downturn has had a devastating effect on construction generally, but sustainable building design continues to maintain and improve its market share.” (Sullivan, 2009)

Both green roofs and green walls have enjoyed ever increasing media exposure. Living walls were included in Time Magazine’s annual list, “The Best Inventions of 2009”. The New York Times published a story in November of 2009, detailing the growing interest in green wall products produced by a New York sheet metal fabricator (Velazquez, 2010).  As public awareness of both green walls and green roofs increases through such mainstream publications, we can expect to see continued evidence in internet search data of the steadily growing interest in these emerging eco-technologies.

Recent economic developments make the future look bright for the green roof and green wall movements, and the industries that support them. Linda Velazquez,  of the website Greenroofs.com, states in her article “2009 Top 10 List of Milestones and Accomplishments” that “The American Recovery and Reinvestment Act of 2009 (ARRA) has prompted a gigantic increase in federal green spending, providing new money to all levels of government, aimed at stimulating the economy, promoting job growth, and lowering energy costs, providing an unprecedented opportunity for advancing green building and sustainability efforts in the U.S.”

MSU Department of Horticulture Green Roof Research Program. (n.d.) What is a Green Roof? What are the Benefits of a Green Roof?Retrieved January 29, 2010, fromhttp://www.hrt.msu.edu/greenroof/#The%20future%20of%20green%20roofs%20in%20the%20United%20States